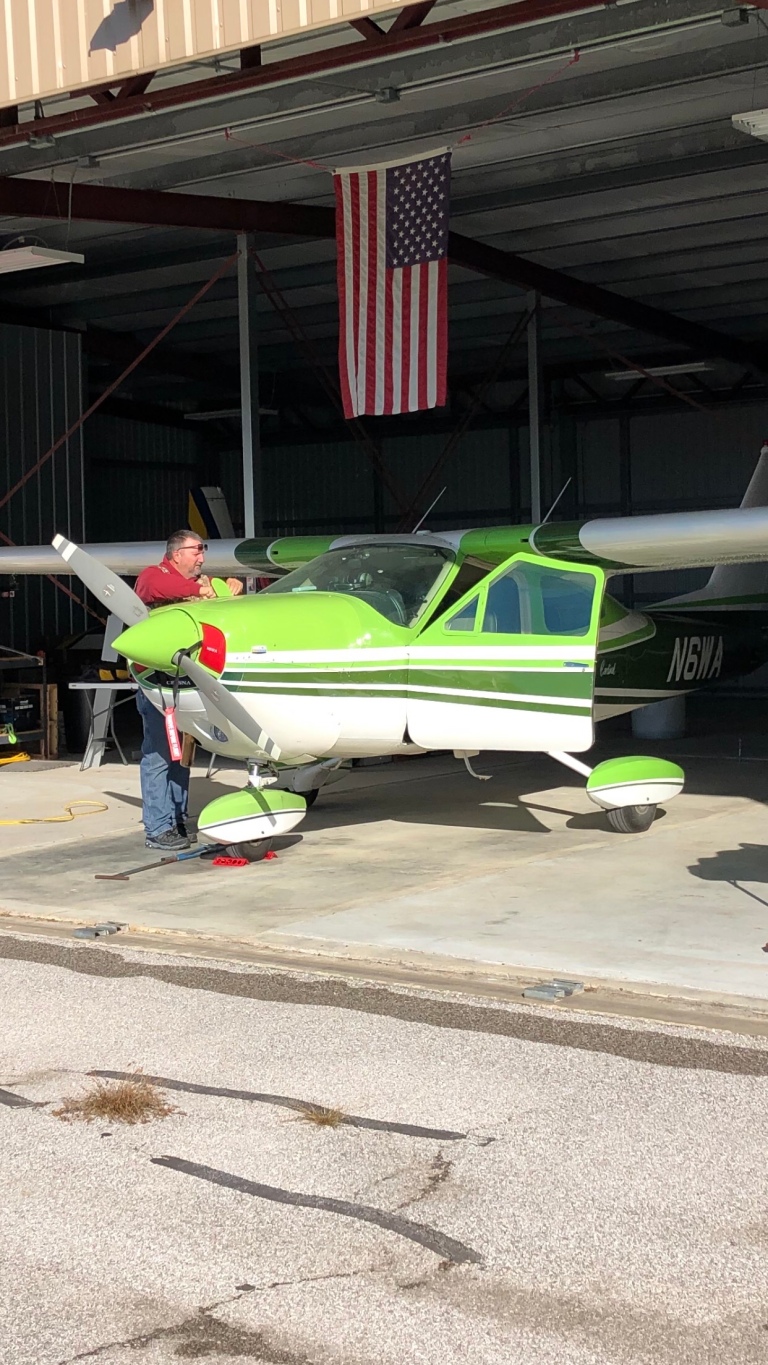 Shortly after I began this work assignment, which will soon be ending for me, I met another contract inspector who works here in the Bloomington, Indiana area. Lance Coppin, is from Oklahoma where he has a lovely wife but he has been on assignment here for six years. Lance has an airplane that he hangers at the Bedford, Indiana airport, a small private airport named for famed early American astronaut, Virgil “Gus” Grissom who was born in the nearby town of Mitchell.

I began this work assignment shadowing Lance on a job he was inspecting in Bedford. One weekend he asked if I would like to see his plane. He was measuring the cock pit control panel for an expensive instrument upgrade and soon would be flying the plane back to Oklahoma to have the electronics upgrade done. I hoped even then that he might take it up for a spin and ask me along. It turned out to be a rainy day and so we did not fly that day but I still enjoyed seeing his plane and hearing him tell me about his love of flying. Also kept in the same hanger as his plane was his first plane that he had sold to another pilot. I got to meet that pilot too and to see that Lance still loved his first plane. I suppose that is like that first car or first girlfriend or boyfriend. Though they are gone and you move on, they always have a special place in your heart.

Lance got his airplane back a few weeks ago and so I have been hoping that I would yet get to go up with him in her before my last assignment here ends in probably a few weeks. His natural gas pipeline construction crew worked Saturday, mine did not. I got to see the new Terminator movie, Lance worked. After the movie and supper back at my little house on wheels on the prairie I heard a knock at the door. It was Lance saying that if the weather was good that he would be taking her up, would I like to go for a ride? I smiled really big and said, “I’d love to.”

Sunday for about an hour I had one of the great thrills of my life seeing the area I have lived in for six months from a much higher perspective. It reminded me of one of the last scenes in one of my favorite movies, An Unfinished Life, with Robert Redford, Jennifer Lopez, and Morgan Freeman. Morgan is dying and his lifelong friend Robert and he are talking as is their morning custom. Morgan says, “Will you bury me next to Griff (Robert’s son, who died young in a tragic automobile accident)?” Robert counters, “Don’t you think you ought to die first?” Morgan lobs back, “It’s gonna happen.” Robert, “Of course I will, that’s where my family lies.” Morgan, “I had a dream last night that I was flying. I flew so high that I could see where the blue turns to black. And from up there it looked like there was a purpose for everything.” Robert, “Do you think the dead forgive us ours sins?” Morgan, “Yes, and I even think it is easy for them.”

Someday I expect my spirit to fly from this body that has been weighing it down for almost sixty-nine years. But, I am in no hurry to take that flight, These last ten years or so after finally figuring out who and whose I am, I have been having a ball.

Thank you Lance for letting me see my little house on wheels on the prairie from a higher vantage point. I will miss the wonderful folks that I have met and worked with here, especially you, Scarecrow. Happy flying to you up in the wild blue yonder.