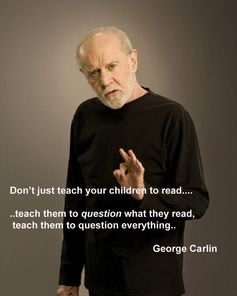 We live an Information Age, all the more reason to teach our children not just to read but to question everything that they read, see, and hear, to be able to think for themselves. There is so much propaganda, spin, charges of “fake new” and actual misrepresenting of the facts for promotion and profit.

AMC’s long running and critically acclaimed series, Mad Men, dealt with the Madison Avenue advertising men of the early nineteen-sixties and how they bought and sold America and the world. Many of the products they sold us on thrilled us but others killed us. I was alive during those days and though I never smoked a cigarette in my life, as a child I ate packs of candy cigarettes and knew by heart all the cigarette commercial jingles. “Winston takes good like a cigarette should.” What nonsense, but as a preacher I once knew said of someone who convinced someone else against their better judgment, “That rascal could sell refrigerators to eskimos.”

Marvel not, for neither I nor anyone would have ever believed back then that one day they would ever be able to sell water in bottles to people at a higher price per gallon than gasoline. I recall that when my baby girl Emily was born in 1980 that we received a letter saying that we had one won a free 5 X 7 professional photograph of our baby girl and one of three great prizes. All we had to do was come have our baby’s picture made and find out which of the three additional wonderful gifts we had won. So we went to get the free photo and to see about the other. It was, of course, a sales gimmick. The photographer took several shots of our beautiful little girl and then a sales person showed them to us so we could pick the pose we wanted to be made into our free 5 X 7. We were, of course, shown various packages with 8 x 10(s), 5 X 7(s), wallet-sized photos, and smaller ones to share with family and friends for hundreds of dollars. Failing to talk us into an expensive package we were told we could still get our free 5 X 7 and a wallet-size of each of the proofs for ninety dollars. The sales person was so shocked when I said no that exasperated he said, “Mr. White, we have never had anyone refuse this offer.” I replied, “So you never met anyone with any sales resistance.” He brought us our free 5 X 7 of our Precious and also our free additional gift of the three possible. The letter had been carefully worded: A small TV, nice camera, or equally nice gift. The “equally nice gift” was a 3 x 4 cut out picture of a teddy bear, laminated with a hole punched in the top of its head, and a piece of colored yarn looped through the hole so it might be hung in baby’s room.

We were completely underwhelmed but I was not surprised. Was it difficult to let all those equally pretty posed pictures of our baby go? Yes, it was. But could we afford them, no we could not, nor to let someone else do our thinking for us.

And that is why it is so critically important that we teach our children not just to read but to read between the lines, to think, and to question all the information received before they act on it. There are clues to what is behind “the news”, “the sales pitch”, “the party line.” But a few of the questions to ask are: What’s in it for you? Why are you asking? How much is it going to cost me? and What are the long term repercussions ?

A mind is indeed a terrible thing to waste. Memorizing dates, slogans or jingles is not thinking. Asking questions and not being satisfied with glib, slick packaged propaganda answers helps us develop our “No-way-dar.” That is thinking for ourselves and saying “No” to the “Brain Trust” and yes to our own power and responsibility.