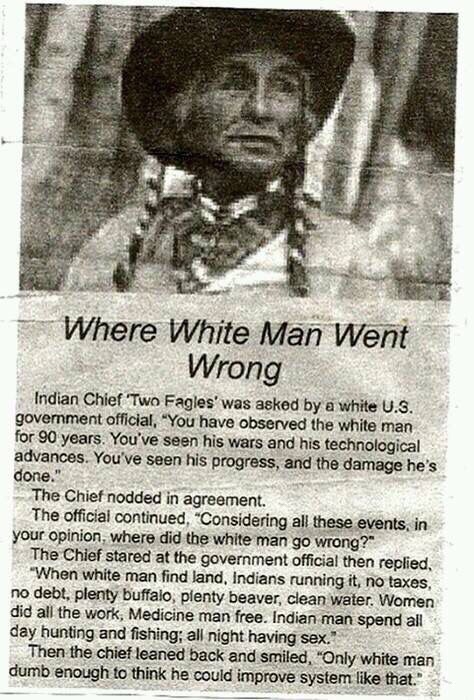 White Men Are Not So Smart

As the clipping I post for today’s blog theme picture makes plain the white man is only as smart as he thinks he is and all too often has not done all that good a job of thinking things out. In the Disney animated movie of several years ago called Pocahontas she sings of the white European men settlers:

The Colors Of The Wind (The first two verses)

“You think you own whatever land you land on

The Earth is just a dead thing you can claim

But I know every rock and tree and creature

Has a life, has a spirit, has a name.

You think I’m an ignorant savage

And you’ve been so many places

I guess it must be so

But still I cannot see

If the savage one is me

How can there be so much that you don’t know

After eight years of the first black President the contrast of having again a white man as President is so clear to me yet not so to the forty percent of the electorate who still vehemently support this man who truly just does not know how very much he does not know. Well, Smart Ass, what makes you so smart? You might ask. I told a friend just today that “Smart Ass” is one of the Universe’s favorite nicknames for me and that if I only had a nickel for every time that I heard the Universe say to me, “What do you think of that, Smart Ass?” Well, let’s just say I’d have a bit load of nickels. Yeah, I changed one word just for you.

But back to white guys who seem to refuse to know what some of the white founders of this country alluded to and even put on paper when they went so far as to say that they thought some things were self evident “that all men (and women too) are endowed by their Creator with certain inalienable rights among which are life, liberty, and the pursuit of happiness.” Grant you those lines were written by a slave owner who though he loved and bore children with a slave woman, only freed the children upon his death. His definition of men was probably only limited to “white men” as sadly seems to be the opinion of many white men today. How else could they just overlook women and people of color in all their planning for legislation to enrich themselves and their friends while depleting Mother Earth and everyone else.

The reign supreme of the white man is coming to an end in this country and all around the world. That scares some white guys to death. Not me, for we have done such a piss poor job (Sorry I just could not pull that punch, but in case it bothers you, piss is in the King James Version of the Bible where one of the Old Testament writers quotes The LORD God as saying that His picks should murder all their enemies even to the “cutting off of everyone that pisseth against the wall.” And in case piss with -eth confuses you a bit (not a substitute here) “everyone that pisseth against the wall” means all the men even the little boys. The girls and women they spared but only to be breed cattle and to slave for them – you know cook, sew, and clean – be good and obedient wives. White guys, many, still have those same cave man ideas today.

The First Men, like male lions, let the females do all the work while they hunted and fished by day and had fun all night. And white guys though too stupid to realize that the red guys already had quite a system going preferred to perpetuate the feudal system that they brought with them like the plague from Europe and Great Britain. And in so many ways it was and still is more savage than the one they killed a hundred million to replace, not only have white men proven themselves to be not very smart but down right mean at times. White guys, we had better hope the ladies and people of color act smarter and nicer when they are running things.

One thought on “White Men Are Not So Smart”